I remember never thinking that I would have another sibling, but the announcement that Kim was pregnant with you was some of the most exciting news I ever got. I had been visiting my dad at the time, as I was still living with my mom; we were in his car and he told me that they had just found out Kim was pregnant. You were a miracle. I was ecstatic.

By the time you were born, I was living with dad and your mom and Jason in a two-bedroom apartment that you probably don’t remember. Moving in with them was one of the best decisions I ever made, and it gave me the opportunity to be there when you were born. I wanted to be there for everything; the day your mom went into labor, the minute you came into the world, the day they brought you home, and every milestone after that.

And I was. The night your mom went into labor, I was half asleep on the couch in the living room. My dad had come in and I think he had tried not to wake me up, but he did and asked him what was going on. I don’t remember what time it was, but it was very late. He told me that your mom was having contractions, but that it was probably not labor just yet. Still, they were going to the hospital, just to be safe. I asked him to call me as soon as they knew anything and then I turned up the ringer on my phone and slept with it by my head the rest of the night. I had a feeling that you were coming; once I fell back asleep, all I dreamt about was you being born.

Around 6:30 that morning, I woke up to a phone call from my dad and he confirmed with me that your mom actually was in labor. I don’t think I’ve ever been so excited or impatient for something in my whole life. I drove down to the hospital that afternoon and remember thinking what a beautiful and perfect day it was. I had never driven to the hospital by myself before, and I was a little lost on the way there but over the course of the next couple of days, the drive to and from became second nature to me. When I eventually got there, I gathered with our family in the waiting room. A couple of my friends showed up, too.

You were born at 3:58PM. Not just a healthy baby–which was all anyone could ask for–but a healthy baby girl with a full head of thick, dark hair. The first time I saw you was from behind the nursery glass; the whole experience was so surreal. I couldn’t believe you were actually there, right in front of me. I couldn’t wait to hold you, but in those few minutes before they brought you out I just stood there behind the glass, dumbfounded by the miracle of your birth–of your actual, physical existence after months of only seeing you in black and white ultrasound photos. I watched my dad from behind the glass when he came into the nursery to hold you for the first time. I remember thinking (and later, writing, because I didn’t want to forget) that I had never seen him look as genuinely happy as he did when he held you right then and there.

The first couple of years (as you remember as I write this but I’m not sure you’ll remember in the future), I lived with you and dad and your mom. We spent a lot of time together, and I took every chance I could to babysit you. We would watch Yo Gabba Gabba on TV and chase each other around the living room. You gradually depleted my small stuffed animal collection, as you seemed to fall in love with every one of them that you found in my room. You would ask if you could keep them, one by one, and I could never tell you no. I think I created a monster.

Still, there was one I gave you on the day I moved out that I hoped would mean a lot to you. It was Maggie, my favorite stuffed animal growing up (the little beanie baby monkey with the purple dress on). I knew I wouldn’t see you as much once I moved out, especially since I was moving to a different state for the summer and wasn’t sure if I’d be back in the fall, so I wanted to give you something meaningful. When I first gave it to you, I explained that it was sissy’s favorite stuffed animal when she was little and I wasn’t sure if you understood or cared. But when I came to visit last weekend, I noticed Maggie on your bed, among a dozen other stuffed animals that must have “made the cut” to stay on your bed and not get tossed up into the white net that hangs from your ceiling with the hundreds of other stuffed animals you’ve accumulated over the years. It meant a lot to me that night, and it still does.

You’re almost four and a half now and also about four hundred miles away. Dad took a job in Louisville about this time last year, and even though it meant you had to move far away from your family, I hope you realize that dad moved you all out there because he loves you and wants the best for you and your mom. Dad has always done what he has to do to give us the best life that he can. He did the same for me when I was younger (even though it never meant moving very far away), and you probably won’t fully appreciate it until you’re older (because I know I didn’t), but you have the best dad in the world.

When I found out you were going to be moving to Louisville, it was so bittersweet. I was proud of my dad and happy that it was going to mean a better life for you, but a huge part of me felt guilty. I felt like I should have stayed home for the two summers I went away to Sandusky so that I could have spent more time with you while I still could. It made me feel like a bad sister, even though I’ve come to terms with it now; there was no way I could have ever guessed you’d be moving so far away. But in those months before you moved, I tried to spend a lot of time with you and I hope you will remember that. I took you to Cedar Point a couple of weeks before you moved and we rode your first roller coaster together! You rode in the front seat and put your arms up with me. I was so proud of you, and I hope I get to take you on a lot more roller coasters in the future. We had a lot of sleepovers at my apartment, too.

On the day before you moved, I came over to help but I mostly ended up hurting myself moving a pantry with dad, and spending time with you instead. We ran around the backyard and we played Nintendo DS because your mom and Dad had just bought you one (I’m gonna be honest with you…it was mostly to keep you quiet on the car ride to Kentucky, but also because you were obsessed with mine).

When I left that night, I was dreading saying goodbye to you and dad and your mom. When I left the house late that night, dad was still hard at work getting everything packed into the moving truck. You and your mom were in the living room, and I think you were oblivious to the fact that we weren’t going to see each other for a while. I remember being thankful for this at the time, because I didn’t want us to say sad goodbyes. I gave you a big hug and kiss and told you that I would come to visit soon; you were distracted by a big flashlight that had surfaced during the move and were shining it around the room, giggling as your mom told you to be careful not to shine it in your eyes. That is the memory I will always have of leaving that night.

As I walked out to my car to head back to my apartment, I fought back a couple of tears but by the time I was on the road, I was happy. I was happy to think that you and dad and your mom were going to start a whole new chapter together, and that you were all going to be so happy. So far, it seems like you are. I asked you last weekend while we were at the ice cream shop if you liked Kentucky, and you said, “Yeah, it’s pretty!” 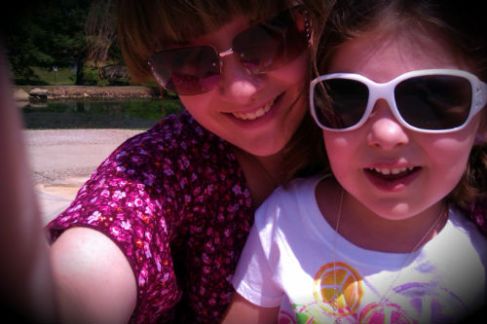